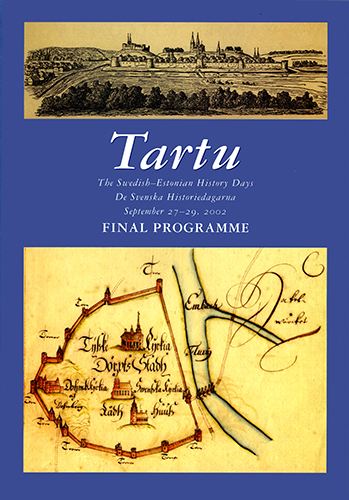 As part of its ramble around Sweden, and later on around the Baltic region, the History Days programme now reached Estonia and the ancient centre of learning, Tartu. The Swedish-Finnish cooperation during the run-up to the history days in Turku and the corresponding Swedish-Norwegian ones in Karlstad and Gothenburg had shown not only the value of a wider ranging illumination of traditional historical issues, but also the role of an interest in history in building a bridge between neighbouring countries. The choice of Tartu was not difficult to comprehend.

We have a 150-year period of shared history with Estonia, and links have been close since prehistoric times. Tartu was founded in 1030 and during the 13th century, as Dorpat, it became an episcopal see under the authority of the Teutonic Order. As a Hanseatic town, there were close links with Russia, and during the Swedish era, Dorpat developed into a centre of learning with the setting up of Sweden’s third Court of Appeal there in 1630 and, above all, the establishment in 1632 by Gustavus II Adolphus of the university – Sweden’s second.

Estonia has a dramatic history. Tartu has been laid waste by war, and in 1775, by an extensive fire. Remnants of former days include, in particular, the old cathedral church, now reverently restored as a university museum. In the 19th century, the university gained a position of eminence amongst the seats of learning in the Russian Empire and to this day, the main building, with its Empire style façade, makes a classical contribution to the cityscape. This was where we would spend our time during the history days. In front of the building stands a statue of Gustavus II Adolphus, re-erected in 1992, whilst around the Cathedral Mount lie the university buildings in a secluded and fascinating milieu that brings to mind the centuries when the city was the heart of a cultural union between east and west.

The Swedish History Days aroused considerable interest in Estonia, and the event turned out to be a memorable one in many ways.